It’s already December! In the spirit of the season, ITI would like to give everyone four video previews to the world’s only rigging engineering training program, Fundamentals of Rigging Engineering. The Program launched in January of 2015, and registration is currently open.

Fundamentals of Rigging Engineering will address a specific knowledge gap for two important industry groups. Engineers who enter the industry with backgrounds and education in mechanical, civil, structural, or other branches of engineering make up the first group. The second consists of the multitude of non-engineers who have worked their way up the ranks via on the job training and experience to fill roles such as: lift planner, equipment superintendent, or master rigger, but lack formal engineering training specific to the precarious tasks they perform every day.

A free, interactive program preview is available here, and provides a full program outline, a breakdown of required and elective courses, instructor profiles, and FAQs.

With all that in mind, sit back, relax, and take in four video clips that display just a portion of the incredible content that is awaiting Fundamentals of Rigging Engineering participants.

1. Keith Anderson on Tandem Lifting from Course #RE-130

In the clip below, Program Manager and Author of Rigging Engineering Basics, Keith Anderson presents an example of offloading a heavy lift ship using two boat mounted cranes. This excerpt is from #RE-130 – Rigging, Equipment & Applications.

2. Mike Parnell on Load Weight Estimation from Course #RE-130

Load weight estimation is the subject of the next video. The clip features ITI Co-Founder & Technical Director Mike Parnell, and is featured in Module 4 of the Rigging Equipment & Applications Course.

3. Larry Shapiro on Luffing and Slewing from Course #RE-120

4. Jonathan Parnell on Center of Gravity from Course #RE-110

Build your knowledge foundation by watching Jonathan Parnell, ITI Project Manager, discuss center of gravity moment method. This lecture is presented #RE-110 – Introduction to Rigging Engineering in Module 2 – Principles of Center of Gravity.

Check out what other topics are covered in the Fundamentals of Rigging Engineering by clicking on the image below. 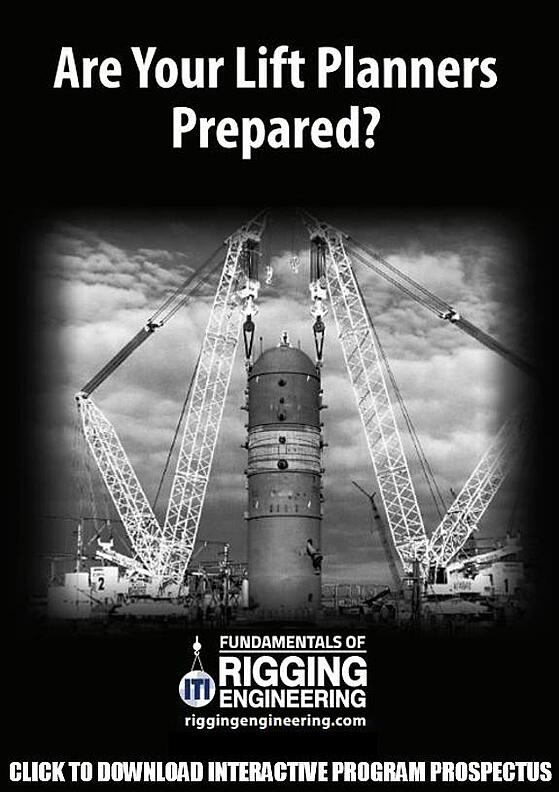 How to Do Rigging Engineering Calculations [New Release]