His learnings, lessons, and technical know-how continue to live on as the author of Entertainment Rigging, viewed by most as the preeminent resource guide on the subject. After an arduous battle with throat cancer, Mr. Donovan passed away in 2009. Entertainment Rigging continues to be a staple for organizations and individuals involved with stage and entertainment rigging in the decade plus since Mr. Donovan’s passing. 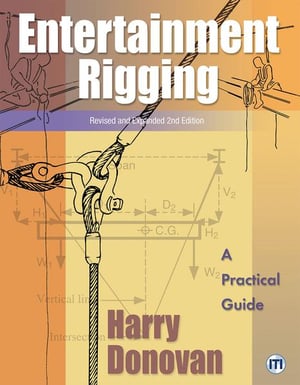 ITI is proud to carry forward Harry Donovan’s work with Entertainment Rigging, 2nd Edition, available now from the ITI Bookstore. Foundationally, the 2nd edition includes the entirety of the initial, updated and enhanced with brand new original technical drawings and diagrams to help learners understand the complex topics in full.

Entertainment Rigging, 2nd Edition comprehensively covers all aspects of arena rigging, from practical shackle details to complex force equations. Although the focus for Entertainment Rigging is the entertainment industry, the information is applicable to many trades that use rigging, such as construction, mining, material handling, logging, longshore work, cranes, and industrial rigging.

The 700+ pages of text, include hundreds of updated drawings, pictures, and tables. Readers will find dozens of formulas which enable riggers in the field to simply calculate dimensions, forces, loads, and the required strength of rigging equipment. It also contains many rules of thumb which enable safe rigging without calculations.

Entertainment Rigging 2nd Edition is available from the ITI Bookstore for $109.95.