Previous
Next
A non-injury accident recently occurred.  ITI was asked to investigate and deliver a report of findings concerning the circumstances.  A pipe (3” walls, 72,000 lbs) was being placed into position on a gas refinery unit.  The crew was told to use three synthetic web slings at three points on the load.  A lion’s share of the load (90%+) was being lifted by the two slings attached to a strongback and the main hoist block.  Since the location of the center of gravity completely dictates which slings will carry the load’s weight, it’s doubtful the whipline and single choker hitch at the lower end of the structure were actually anything more than a glorified “tagline”. 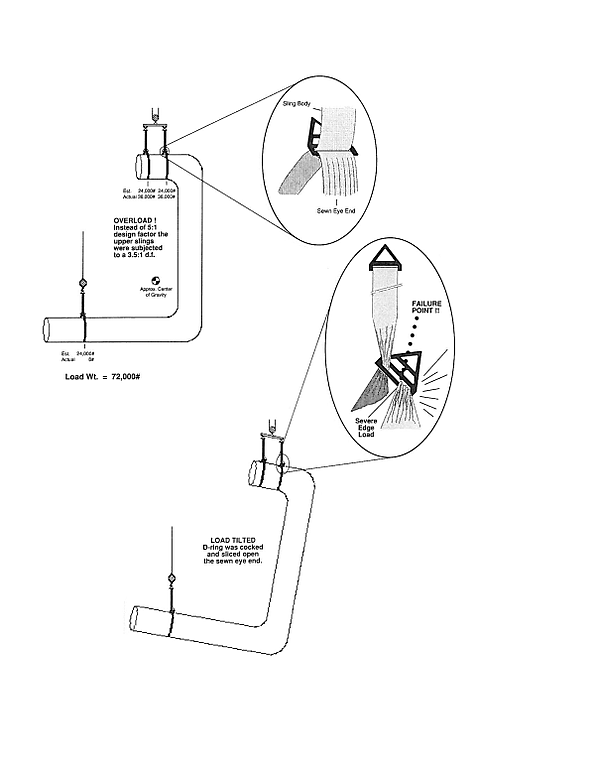 Each of the three slings (type SCH2-912 [2 ply, 12” wide]) had a rated capacity (lbs) of 33,600 vertical; 67,200 basket; and 25,200 choker.  Had all three pick points been rigged as basket hitches, even the two slings from the strongback would have had sufficient capacity to carry the entire load.  However, the riggers opted to use choker hitches, hoping for better friction between the slings and the pipe.  By the use of choker hitches and not realizing the location of the center of gravity, the two upper slings were subjected to a load of approximately 36,000 lbs per sling, with little or no load on the third remaining sling.

The whipline and third sling were then used to adjust the pipe to a level plane for final placement.  In the tilting process, the webbing, which made up the running portion of the body of the sling as it passed through the triangular D-ring, slid and gathered into one end of the D-ring.  As a result, the sewn eye secured to the D-ring slid to the other end of the opening, and the D-ring acted as a letter opener, slicing the sewn eye webbing from one side to the other.

Once the first strongback sling failed, the second strongback sling, also cocked out of alignment, received close to the entire load weight and subsequently failed.  The third sling, which was subjected to a shock load as a result of the pipe falling and tumbling, and it’s D-ring ripped out of its attached eye.

This is an article from The Professional Rigger newsletter, 1990.

Rigging Tips: Sizing up the situation

To select the proper size and rated capacity rigging equipment, the rigger depends on a number of sources of information. The ...
Start Reading
Industrial Training International Mar 9, 2011 9:57:00 AM < 1 min read