The back half of 2018 will see ITI release the ITI VR Overhead Crane Simulator to assist a variety of industries efficiently train and qualify their overhead crane operators. I had the opportunity to sit down with ITI Founder and Technical Director, Mike Parnell, to discuss how overhead cranes are used in heavy industry and how he designed the unique training scenarios for the ITI VR Overhead Crane simulator.

The ITI VR Community will be hosting a live webinar discussion on the same topic. The webinar is set for August 1, 2018, at 10 AM Pacific Time. Registration is FREE and all are welcome to join.

Amanda Henry: Who operates overhead cranes, in what environments, and what unique load handling assignments is this machine made for?

MP: Overhead cranes are used in a variety of environments. First and probably the largest is the handling of components made in a manufacturing setting. A variety of components get machined, laid, cut, milled, drilled, prepped, and then they become assembly components to build into a larger item. A good example might be a wing, spars, tail spars, the body – various components of an airplane – are assembled over time and then finally brought together to one final assembly point, all of which is being generally handled by an overhead crane. Then in manufacturing, such as a steel or paper mill where a bulk product is being made, that product ends up in some final form that needs to be handled by an overhead crane – such as a roll or paper or an ingot of steel. The other thing, certainly in all of these environments, the machines that handle are the components – stamping machines, transport machines, furnaces, rolling systems – that make the product, all require maintenance. At certain times, those machines need to be stopped from production, and various items pulled apart – motor boxes, gear boxes, rollers, things that need lubrication, reshaping, and/or replacement with new or like-in-kind item.

AH: What are the most common overhead crane models available in the field including make, models, capacities, engineering specs?

MP: I would suspect the workhorse of the environments, particularly light manufacturing world be 60ft bays, that means a 60ft bridge, is typically 4-5 stories tall. Then, the capacity may be in the 30-ton range or less. Many cranes will have a 2-hook/2-hoist system, a main, and an auxiliary. You may have a 30-ton hook and a 5-ton hook. When you go into heavy manufacturing, typically you’ll have wider bays, sometimes 90-ft wide bays, sometimes 6-8 stories tall, and 50-70-ton cranes would not be uncommon in that range for medium to heavy manufacturing. As you get into power house and power generation, they may still be at the 90-100 ft span for the bridge, and anywhere from 6-8 stories tall. The capacities may be at least 125 ton up to 300 ton would not be uncommon for changing out turbines and generator components. Nucellar plants, cold-fire plants, gas-fire plants, and oil plants all fall in to the heavy 125-300-ton range.

AH: What operational challenges are unique to overhead cranes, compared to other heavy equipment, that you take into consideration when designing training and assessment scenarios?

MP: Most all other heavy equipment is either mounted on rubber tires or tracks and it works on the floor level/ground level where the operator needs to maneuver the machine and whatever other pay-load it has through a direct obstacle course of adjacent machinery, and/or moving objects. Such as a forklift, maybe even a Taylor Forklift, that might be a 30-ton capacity carrying a large load down through large bays, negotiating all those turns and having a clear vision and the obstruction potential is always high. Overhead cranes don’t necessarily move a load across a floor, typically they’ll pick up the load and go over other obstructions and other equipment over the top and your flight path is much easier arranged from take-off to set-down. However, it does give the operator a rather unique and different perspective. It’s not always as such that the operators are immediately adjacent to the load, which may be a hazard all by itself.

The distance perspective is something that needs to be managed by the operator and depth perception and timing with the machine is always critical to be able to handle the load without generating undo swing, or erratic motion that would cause the load to potentially strike some object or obstruction around it, or to cause a failure of the rigging. The difference between ground level operation vs. flight is that if you see ground-level pedestrians or vehicular traffic, you negotiate through or around those objects and it’s not always clear when you’re flying an overhead crane. The operator really needs to pay attention to where the people are, and avoid flying loads over those people. They hopefully should have the ability to bridge or trolley to try to manipulate that load in a different flight path to avoid that risk of loads over people. In some cases, the folks working may not even realize that there is a load near. The operator has that responsibility, as would someone operating heavy machinery, to ensure that the load and machine under their control is not producing any risk to employees or operations surrounding it.

AH: Is there anything about virtual reality that makes training and assessing overhead crane operations more advantageous?

MP: What’s very important in the VR environment is that a task or assignment can be made to the student/participant. The trainer can assess the activity: the takeoff and landing point, the height, available space to manipulate the load in, and move the crane into location to acquire the load, then perform the task and get the load set and stabilized. That can all be done, relatively speaking, in very short time compared to a normal operation where it will take maybe a corporation between a rigger and signal person that’s assisting making final connections, alignment, hoisting, set down, and stabilizing the load. In a VR environment, and operator could achieve 15 tasks in an hour, whereas out on the floor in that same hour, might be able to only accomplish 3 or 4.

Certainly, the obvious economic advantages are: no lost production on live cranes out in the work bay/work place, low risk/no risk to live equipment, no risk to obstructions, other equipment, the building, the crane, or to people. Another advantage is that you can create situations that cause the operator to be practiced for reactions such as: failed rigging, strong wind currents coming through the building (tunnel effect), power outages, unsuspected vehicular/pedestrian traffic that shows up that requires a response or reaction by the operator. Those can all be programmed in, and the operator is then “toughened up” to be able to respond to those in a virtual environment. In some cases, they may only be challenged by half of those in a 10-year span. The training and training to respond appropriately is very valuable in the VR realm, sometimes it can’t be duplicated well out in a live environment. 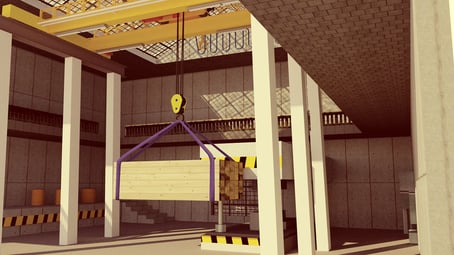 AH: What sort of scenarios did you design for the ITIVR Overhead Crane Simulator and why?

MP: We developed tasks that are pointed towards our learning objectives that we believe will help build good skills in an operator. Those included: evaluation of the controls as a task start off element and if we have a malfunction, then the operator is forced to make a decision as to how to resolve the issue. So, that is a pre-use challenge that the operator will be faced with. During the task activity, some are created for operator-only involvement, or some with operator, signal person, and tagline person. Some are manipulating the crane and load to a pick and turn/up-righting and down-righting activity, which takes skill and time to create the proper load reaction to get it to not over-tip and/or also not to result in any free-fall in the lay down process. It takes time and practice to get that skill under the belt so that the crane isn’t shock-loaded, nor is there any load damage. Flying loads, long tall loads, and close quarters require depth perception.

We have a number of scenarios that cause the operator to respect all of the environment and potentially cause himself to be relocated in the bay so that he can maintain solid visual on the load and on the handling equipment. Also, we have included the task related to accuracy and speed, which is time sensitive to move some components coming out of a cryogenic tank into a receiving cryogenic task for shipment, and time is of the essence. Controlling the load coming out and not causing damage in a quick and efficient manner, getting that load into the other tank just causes the operator to use the machine appropriately and stay clam but steady in making the move in a very determined manner. There are a number of scenarios are in that same vein; moving repetitive load components from upper mezzanine levels down to the floor. These scenarios cause the operator to make sure that’s the crane hook is arriving quietly, without swing, and steadied over the load center of gravity so that the rigging can be connected. In all, we have depth perception, precision, load handling (for insertion and removal of loads in tight areas), load up-righting and down-righting, and timely handling with speed and determination, which when accomplished, show good skill and competency within the operator. Those point towards all the learning objectives that we developed early on. We attempted to create scenarios that would build those skills within the operator. 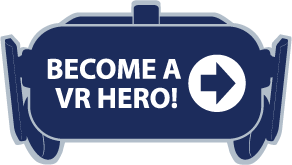 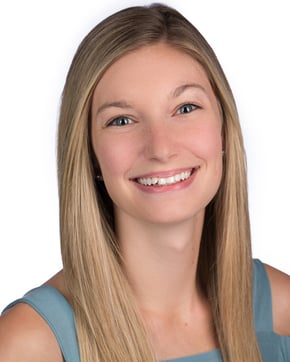