Training to Craning in 60 Minutes: Putting My VR-learned Skills to the Test with a Real 22 Ton Crane [From RoadToVR] 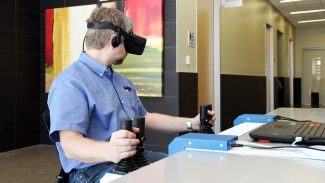 [Note: This article was originally published on www.roadtovr.com, Road to VR is the world’s leading independent news publication dedicated to the virtual reality industry, "We explore the bleeding edge of virtual reality, augmented reality, and human-computer interaction."]

Training to Craning in 60 Minutes: Putting My VR-learned Skills to the Test with a Real 22 Ton Crane [From RoadToVR]

Last week, I traveled to the Houston Area Safety Council in Pasadena, Texas, to put Industrial Training International VR’s new crane simulator through its paces. While ITI has been training crane operators, riggers, and signallers for 30 years, the inclusion of VR in their training programs is a recent development. To test the effectiveness of their VR crane simulator ITI offered to let me —someone who has never operated heavy machinery in their life — spend an hour training with the system and then apply what I learned to operating an actual crane.

Unlike traditional simulators, which physically replicate a crane’s cab, surrounded by oversized monitors, ITI’s VR crane simulator is compact and rather modest looking. A laptop outfitted with a GTX 1070 drives output to an Oculus Rift, and a metal bracket with four joysticks (interchangeable to match a range of crane brands and models) attaches to any available table using a pair of clamps. The simulator weighs 30 lbs and packs neatly into a rolling Pelican case (at a total of 68lbs) for transport, making it reasonable to take the simulator to on-site locations for training or evaluation of job candidates.

Read the full article at www.roadtovr.com.

Learn more about ITI VR and the VR Mobile Crane Simulator at www.iti.com/vr.

Eric is the co-founder and co-organizer of the HoustonVR Meetup, and an event manager for the Immersive Technology Conference. He was the VR technical adviser for the VR Pain and Anxiety Management pilot program at Memorial Hermann Prevention and Recovery Center, and has been actively involved in the VR scene since the 2012 Oculus Kickstarter. He has been a professional computer programmer for over 20 years. 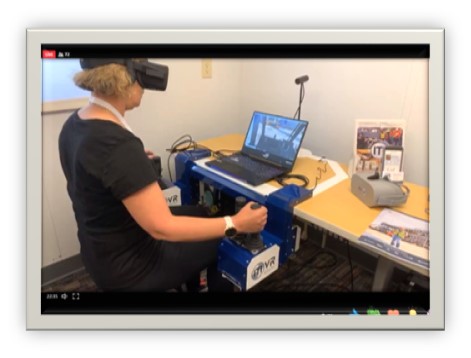