We recently had the pleasure of getting to speak with Wire Rope Exchange's, Bob Glenn to discuss the upcoming ITI Hoisting Excellence Summit. The content of the full article can be viewed below and accessed at: wireropeexchange.com

Industrial Training International, more commonly known as ITI, will be hosting their first ITI Hoisting Excellence Summit in 2023.  The event is slated for February 8-9, and will be held at the Health and Safety Council (HASC) in Pasadena, Texas.  Scheduled speakers reflect a range of experts from heavy industry where intensive lifting operations are involved, along with crane rental firms and safety and training leaders.

We wanted to gain a better idea of what attendees might expect from this event, so we reached out to Zack Parnell, CEO of ITI, who was glad to answer a few of our questions and expand on their plans for this event.

Wire Rope Exchange – Bob Glenn (WRE):  Let’s start with the Health and Safety Council or HASC in Pasadena. Texas; tell us about the organization and its facility there.

ITI – Zack Parnell (ITI):  We host a lot of training at the Health and Safety Council, they are close partners of ours. As we describe it, we’re co-located there.  There are over 1,000 people through the facility every day doing training for site orientations and site safety, and all sorts of learning labs and skills development training as well. It’s just an incredible organization, they have over 3,000 members and 12,000 non-member companies participating in some form. They were established in the early 90’s and set up on their current campus about ten years ago.  And when they built their Skills Development Center, they wanted a crane and rigging training partner, so we began discussions with them, and became that partner in around 2015.

WRE:  So it’s about all kinds of sites and safety for energy, and construction as well?

ITI:  Yes, any member can place their e-learning courses on their LMS (Learning Management System), so that contractors’ employees can go there to take those courses. It’s primarily contractors, construction companies, or maintenance companies that are going on any kind of worksite, and they’re not limited to any specific industry.

WRE:  That’s great background. Now tell us about the origin of the idea to host the Hoisting Excellence Summit – you run lots of training classes, so you’re already in the event business, at least in some way, but I understand that this is something new and unique for your team.

ITI:  Yes, historically you’re right, we host a lot of open enrollment training all the time, which is really skills training, and over the past 10 years we’ve hosted various seminar type events in Houston or Edmonton or Toronto or New York.

Those have typically gone by names like Heavy Rigging and Transport Workshop, or something of that sort.  Those would typically have 100 to 200 people, and it would primarily still be training, but targeted to management people, lift planners, engineers and the like.

And we have a methodology called the Hoisting Excellence Practice and Methodology that we use with companies to help them really improve how they go about creating rigging operations.  That method involves four phases – a discovery phase to understand their current operations, a learning strategy phase where we develop a learning strategy in consultation with them, and then an implementation phase, and finally, a continuous Improvement phase.

We decided to make an event that showcases a lot of the best practices from within that Hoisting Excellence methodology that we use with our customers.  And you’ll see the sessions will include things from ITI, but also our customers showcasing best practices on how to do audits, or how to write procedure manuals, how to conduct and deliver training with simulation, or what lift planning and crane mobilization should look like, and those kinds of challenges.

WRE:  Who do you see this event as being intended to serve?  Do you have an ideal attendee, or to put it a better way, who do you think would get the most out of it?

WRE:  People responsible for lifting operations in any of these large organizations that obviously have very complex operations and a large number of people involved – and have to standardize what they do?

WRE:  We see where you’re offering both in-person and virtual registration for this program.  That seems like a clever way to maximize the ability to participate for everyone involved, so tell us a little bit about the thinking behind that.

ITI:  Most of the sessions are seminar style, thought leadership sessions. So, it’s very easy to open it up to the whole world for a virtual attendance. There are some hands-on sessions during the receptions. We’ve got some really neat equipment demonstrations from some of our sponsors which will be exclusively available to those who are able to join us onsite.

We’re really excited about the in-person nature of this, but certainly want to open it up for everyone interested and will make all recordings available to in-person attendees after the fact as well.

ITI: It’s quite a diverse offering. If you consider the four main the people this is designed for, again, equipment managers, learning and development pros, safety managers and executive leadership, we really have something for everybody.

You can read a complete list of speakers at this link: www.iti.com/summit#speakers

ITI:  The Keynote is going to be from Pat Richie. He served as the team Chaplin for the San Francisco 49ers and (San Francisco) Giants, and he’s talking about organizational health, where that begins, and how you get really good at training and development, and how you have to have a healthy organization to do that, and what that means.  He’s with The Table Group, and works with Patrick Lencioni, the author of The Five Dysfunctions of a Team.

There are also a lot of technical best practice sessions, Kiewit is presenting their Crane Management Methodology. They own over 600 cranes in North America. So how do they go about developing and verifying Operators by make and model? How do they go about developing Signal Persons, Rigger One, Rigger Two, and evaluating all those people? So that’ll be great. Shell is talking about how they are furthering their adoption of Industry Standards as opposed to trying to write their own standards all the time, so that’ll be interesting.

Staying with the technical side of things, our founder, Mike Parnell, is talking about how to write good hoisting procedures, in addition to ASME. How do you adopt a ASME standards and then write good procedures for your company? So those are some good examples of the crane and rigging technical sessions.

There’s some really neat learning and development sessions for L&D professionals. We want to give people an “under the hood” look at simulation, so our Director of Simulation is going to give a behind-the-scenes look at the VR Crane Simulator. And in another session, he’s going to jump into game design, which is really about VR simulation design fundamentals, which is an interesting topic as more companies are thinking about us simulation more extensively.

WRE:  On Day One, you have some formal training sessions?

And we’ve got a very limited offering where we get to take two 15-passenger vans to Exxon Mobil’s headquarters to check out their Immersive Realities Center.  We’re just very limited in the space there, and the Exxon Mobil folks are going to be presenting about their whole initiative in a General Session as well.

WRE:  And those two bootcamps are standard training programs that you already run and offer regularly?

WRE:  You’ve got several sponsors on hand providing solution demonstrations as they describe it. Would you like to talk more specifically about what some of those are and the folks providing them?

What’s neat about the dispatching tool, a lot of times a dispatcher will find that they’re sending a crew to a site that has certain requirements. But then, that crew might have a few people that don’t have the site safety training yet or something else, so a dispatcher can be the first person to identify a training gap. They’re able to efficiently assign those people courses so they go take the courses and it shows up as good – so they’ll talk about that whole system.

Liebherr and Exxon-Mobil are both sponsors.  In terms of what they’re providing, we talked a bit about Exxon and presenting their Immersive Realities Center, Liebherr has a really neat session.  They’ll be talking about the MyLiebherr portal and how that integrates with the VR Crane Simulator.

And then between Mazzella, Barnhart and Crosby… They’re doing some really neat equipment demonstrations and on the Hoisting Summit’s website there are videos of what they’re bringing, that’ll be exciting.

WRE: I’d be interested to see the   demonstration, I haven’t really studied how it works, where they handle a load without any tag lines.

ITI: That’s right. Yeah, it’s a really neat, it uses gyros, I believe that’s the underlying technology, “remote load orientation” is how they describe it. As we think about doing these in the future, we like to bring the latest and greatest technology.  If it’s helping make people safer or more efficient and productive, you know we’re all about it, so that’s why they’re coming.

WRE:  On the final day of your agenda, there’s an HASC Tailgate Extravaganza on Friday. Can you tell us more about what that involves?

ITI:  It’s not our event, but we put it on our site because we just want people to be aware of it. And it’s a great thing to go attend if you’re in town that last day. The HASC has been doing this for many years, it’s basically a big trade show at the Pasadena Fairground, and they’ll announce their Safety Excellence Award nominees. It’s all outdoors. They’ve got quite a few exhibitors, there’s live music, there’s food and drinks and it’s just a fun kickoff to Super Bowl weekend.

WRE:  We found a recap video from 2022 on YouTube and it looks like a lot of fun, but actually it’s probably not a bad networking opportunity either.

ITI:  Houston is one of the only places in the country where, there’s just such a concentration of people in heavy industry, and construction and energy that you can have a fun event like that where you seem to run into customers.  Where else does that even happen? 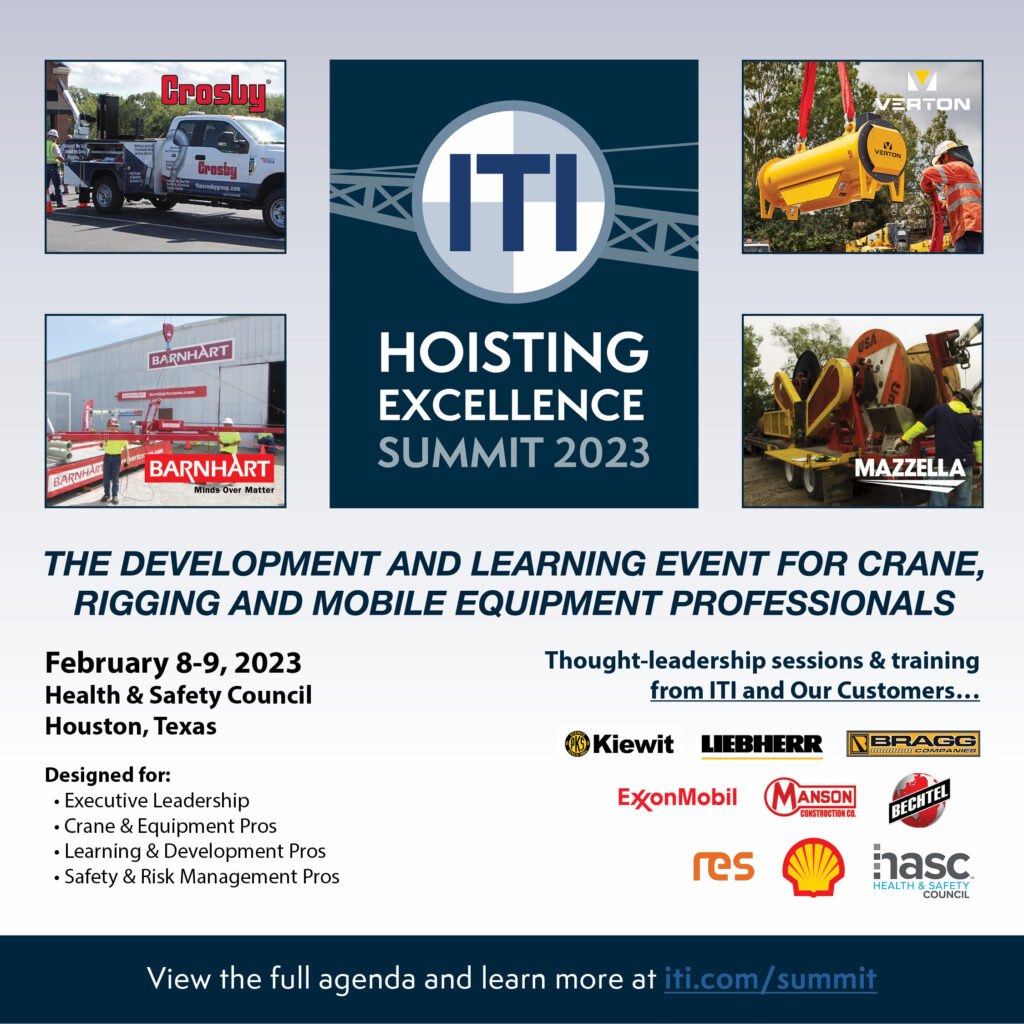 Industrial Training International (ITI) is a global leader in the design and delivery of learning solutions for organizations conducting crane, rigging, and load handling activities. Founded in 1986, the company originally specialized in instructor-led training, field services, and consulting. ITI has since grown to also produce live online, and on-demand courses delivered via the ITI Learning Hub and has been recognized with numerous industry association awards for its groundbreaking virtual reality crane and equipment simulations solution. For more information, visit: iti.com

We are just two months out from the premier of the ITI Hoisting and Excellence Summit! As our event agenda continues to grow ...
Start Reading